A major part of actually performing a Secure Code inspection is performing a transactional analysis. An application takes inputs and produces output of some kind.

All input to the code needs to be defined. For example, input can come from:

Input changes the state of an application. Attackers use input streams to attack applications. Would systems lacking an input mechanism be 100% secure? Probably not.

The input mechanisms, the path the input takes throughout the application, and the output based on the transformed input needs to be documented.

Transactional analysis is of paramount importance when performing code inspection. Any input stream that is overlooked may be a potential door for an attacker.

Transactional analysis includes any cookie or state information passed between the client and server and not just information inputted by the user (the payload).

Transactional Analysis includes dynamic and static data flow analysis; where and when variables are set, how the variable are used throughout the workflow, and how attributes of objects and parameters might affect other data within the program. Transactional analysis can help to determine if the parameters, method calls, and data exchange mechanisms implement the required security.

All transactions within the application need to be identified and analyzed along with the relevant security functions they invoke. The areas that are covered during transaction analysis are:

General principles (What to look for)

For each of the areas above a reviewer must look at the following principles in the enforcement of the requirement:

Understand what you are reviewing:

The analyst must be aware and knowledgeable of the underlying framework

In struts the struts-config.xml and the web.xml files are the core points to view the transactional functionality of an application.

Example: The struts framework has a validator engine, which relies on regular expressions to validate the input data. The beauty of the validator is that no code has to be written for each form bean. (Form bean is the java object which received the data from the HTTP request) . The validator is not enabled by default in struts. To enable the validator a plug-in must be defined in the <plug-in> section of struts-config.xml in Red above. The property defined tells the struts framework where the custom validation rules are defined (validation.xml) and a definition of the actual rules themselves (validation-rules.xml).

Without a proper understanding of the struts framework and by simply auditing the Java code one would not see any validation being executed and one does not see the relationship between the defined rules and the java functions.

Without knowledge of these files a transactional analysis would be very difficult and not accurate.

Example of a web.config file:

From this config file snippet we can see:

loginUrl: Specifies the URL where the request is redirected for logon if no valid authentication cookie is found.

protection: Specifies that the cookie is encrypted using 3DES or DES, but data validation is not performed on the cookie. Beware of plaintext attacks!!

The point to make here is that many of the important security settings are not set in the code per se but in the framework configuration files. Knowledge of the framework is of paramount importance when reviewing framework-based applications. 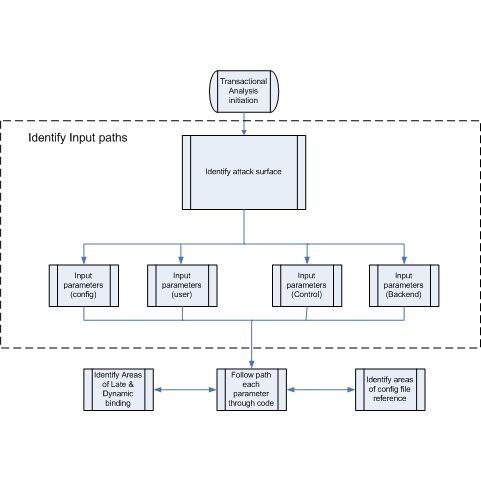