This article describes the many different types or categories of cross-site scripting (XSS) vulnerabilities and how they relate to each other.

Early on, two primary types of XSS were identified, Stored XSS and Reflected XSS. In 2005, Amit Klein defined a third type of XSS, which he coined DOM Based XSS. These 3 types of XSS are defined as follows:

Stored XSS (AKA Persistent or Type I)

Stored XSS generally occurs when user input is stored on the target server, such as in a database, in a message forum, visitor log, comment field, etc. And then a victim is able to retrieve the stored data from the web application without that data being made safe to render in the browser. With the advent of HTML5, and other browser technologies, we can envision the attack payload being permanently stored in the victim’s browser, such as an HTML5 database, and never being sent to the server at all.

Reflected XSS occurs when user input is immediately returned by a web application in an error message, search result, or any other response that includes some or all of the input provided by the user as part of the request, without that data being made safe to render in the browser, and without permanently storing the user provided data. In some cases, the user provided data may never even leave the browser (see DOM Based XSS next).

As defined by Amit Klein, who published the first article about this issue[1], DOM Based XSS is a form of XSS where the entire tainted data flow from source to sink takes place in the browser, i.e., the source of the data is in the DOM, the sink is also in the DOM, and the data flow never leaves the browser. For example, the source (where malicious data is read) could be the URL of the page (e.g., document.location.href), or it could be an element of the HTML, and the sink is a sensitive method call that causes the execution of the malicious data (e.g., document.write)."

For years, most people thought of these (Stored, Reflected, DOM) as three different types of XSS, but in reality, they overlap. You can have both Stored and Reflected DOM Based XSS. You can also have Stored and Reflected Non-DOM Based XSS too, but that’s confusing, so to help clarify things, starting about mid 2012, the research community proposed and started using two new terms to help organize the types of XSS that can occur:

Server XSS occurs when untrusted user supplied data is included in an HTML response generated by the server. The source of this data could be from the request, or from a stored location. As such, you can have both Reflected Server XSS and Stored Server XSS.

In this case, the entire vulnerability is in server-side code, and the browser is simply rendering the response and executing any valid script embedded in it.

Client XSS occurs when untrusted user supplied data is used to update the DOM with an unsafe JavaScript call. A JavaScript call is considered unsafe if it can be used to introduce valid JavaScript into the DOM. This source of this data could be from the DOM, or it could have been sent by the server (via an AJAX call, or a page load). The ultimate source of the data could have been from a request, or from a stored location on the client or the server. As such, you can have both Reflected Client XSS and Stored Client XSS.

With these new definitions, the definition of DOM Based XSS doesn’t change. DOM Based XSS is simply a subset of Client XSS, where the source of the data is somewhere in the DOM, rather than from the Server.

Given that both Server XSS and Client XSS can be Stored or Reflected, this new terminology results in a simple, clean, 2 x 2 matrix with Client & Server XSS on one axis, and Stored and Reflected XSS on the other axis as depicted here: 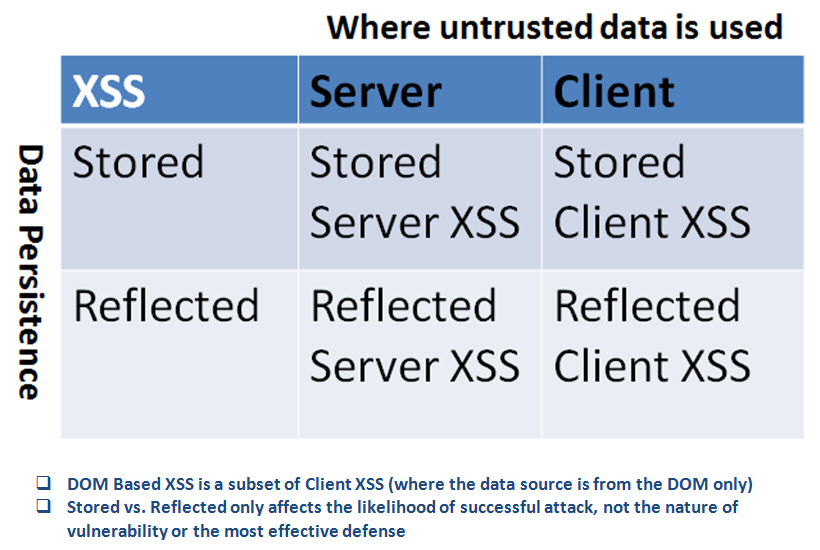 Server XSS is caused by including untrusted data in an HTML response. The easiest and strongest defense against Server XSS in most cases is:

The details on how to implement Context-sensitive server side output encoding are presented in the OWASP XSS (Cross Site Scripting) Prevention Cheat Sheet in great detail.

Input validation or data sanitization can also be performed to help prevent Server XSS, but it’s much more difficult to get correct than context-sensitive output encoding.

Client XSS is caused when untrusted data is used to update the DOM with an unsafe JavaScript call. The easiest and strongest defense against Client XSS is:

If you know that a JavaScript method is unsafe, our primary recommendation is to find an alternative safe method to use. If you can’t for some reason, then context sensitive output encoding can be done in the browser, before passing that data to the unsafe JavaScript method. OWASP’s guidance on how do this properly is presented in the DOM based XSS Prevention Cheat Sheet. Note that this guidance is applicable to all types of Client XSS, regardless of where the data actually comes from (DOM or Server).

A number of us in the industry have been discussing the new terms Server XSS and Client XSS since mid 2012 and we all agree that these terms help bring more clarity and order to the XSS terminology landscape.