This is the first release (February 2013) of the Mobile Application Threat Model developed by the initial project team (listed at the end of this release). Development began mid-2011 and is being released in beta form for public comment and input. It is by no means complete and some sections will need more contributions, details and also real world case studies. It's the hope of the project team that others in the community can help contribute to this project to further enhance and improve this threat model.

Threat modeling is a systematic process that begins with a clear understanding of the system. It is necessary to define the following areas to understand possible threats to the application:

How to Use the Mobile Threat Model

Although mobile applications vary in function, they can be described using a generalized model as follows:

Interaction with on device applications/services

Interaction with off device applications/services

This section defines what purpose does the app serve from a business perspective and what data the app store, transmit and receive. It’s also important to review data flow diagrams to determine exactly how data is handled and managed by the application.

The process of identifying a threat agent is very simple and have been mentioned in the below steps:

S1: Take the list of all sensitive data (or information to protect) listed down from Section 2 – Mobile Data

S3: The medium used to access the same listed in S3 is the Threat Agent to be identified

Let us understand it in a better way using an example of a Financial Application (specifically a Banking Application). Following the process as mentioned above:

S1: Sensitive data present in the application has been listed as: Beneficiary Details stored in some form in the Phone Application Memory and User Credentials used for authentication transmitted to the server. S2: List the various ways of accessing information:

S3: From the above points, we list down the medium used:

From the above example you should have a clear picture on how to identify Threat Agents. Below is list of threat agents, which were identified while analyzing various commonly used applications.

Listing of Threat Agents - By Category

Below is a diagram illustrated to understand the Threat Agents and Threats in a visual manner: 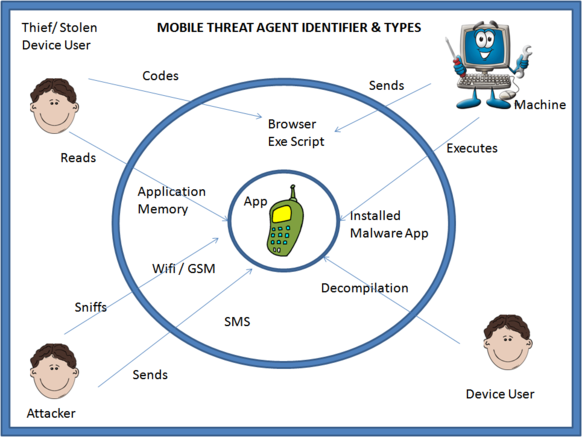 In this section, we will observe different methods an attacker can use to reach the data. This data can be sensitive information to the device or something sensitive to the app itself.

Destruction of the asset is normally classified as attack. Attack can be further categorized as a planned attack or an unplanned one. Unintended attacks are normally caused due to some form of accidental actions. 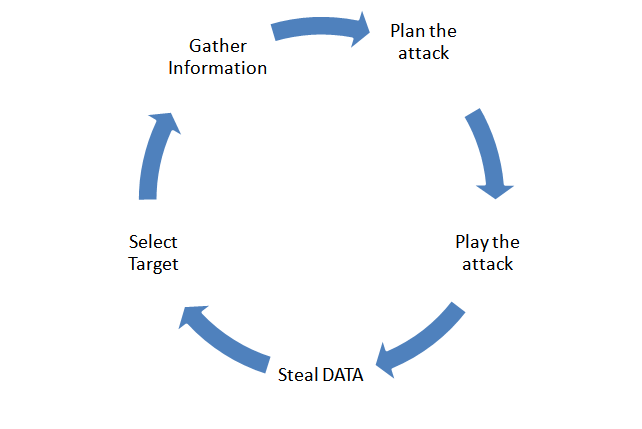 The above mentioned attack methodology is the one in which the data which is targeted is application specific memory and the method used is memory based analysis. The attacker steals any sensitive data like passwords, userid, user account information which is stored in the application memory by reading the device memory.

We have listed down other methods below which can be mapped with the second section in a similar fashion:

The classification of attacks based on the way data is handled:

What are the controls to prevent attacks. This is the last area to be defined only after previous areas have been completed by the development team.

Special thanks to the following team members who contributed to the initial release of the threat model: