From OWASP
Jump to: navigation, search
This Page has been flagged for review. Please help OWASP and review this Page to FixME.
Comment: This project seems outdated

the main design is: 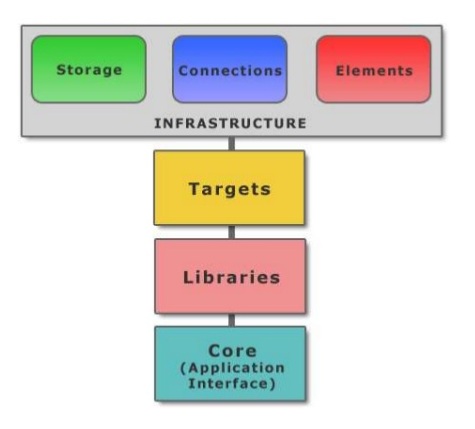 This includes the essential elements of any development framework and it’s not related to security like: string, hash, list, serializer, database, registry manipulation, sockets and so on.

This is the beginning of the SRDF. This part is simply the Target from your security tool. What do you want to secure or secure from. And it includes Files (PE Files and others), Processes and Packets.

That’s the security tools that the SRDF support. And it’s divided into two namespaces: malware and network

The Core includes the Logging system and the back-end Database.

And also, it’s the Application Interface. Like cConsoleApp … and you can inherit from it to create your own User-Interface.

2. Code: it contains the NativeCode class and StoredProcedure … and they represents the shellcode and the code that stored in database. Like a virus detection routines inside an Antivirus

3. XML: and it contains the XML Encoder and the Serializer.

1. Internet: and it contains the internet communication protocols like sockets, HTTP Sockets and so on.

2. IPC: and it contains the Inter-Process Communication protocol

3. User-Mode to Kernel-Mode Communication: and it contains the communication protocol to communicate to the kernel-mode part of the SRDF

1. Databases: and it contains the Database class and SQLiteDB and so on.

2. Files: and contains the File writing and logging classes

3. Registry: and it contains the registry read and write

This namespace describes the File Formats of The Files that could contain malicious code like: Executable Files (PE and ELF) and Document Files (PDF, Docx …) and so on.

Until now it contains The PE Files parser

And it includes one class only named cProcess. And, this class describes a running process and parses its PEB and gives you the important information about the process and its memory map. And support injecting code and create a remote thread.

And it includes classes that describe an internet packets captured on the wire or generated for an attack.

And also, it contains the x86 assembler and disassembler (using Pokas Emulator Assembler) and allow to contain other assemblers and for other platforms.