Now it's time to tell about the hackathon, where 15 OWASP volunteers from 10 different companies gathered on Wed September 27th to find out how to add security into devops process in real life. This was done as a  DevSecOps mini hackathon. While normally hackathons may last even two full days, this lasted only 12 hours. It was organized at Nixu’s office in the beautiful Keilaniemi area. We had really enthusiastic athmosphere!

Many of the participants already had former experience of the CI tools and Docker, while the others had experience on some of the security testing tools, which was a nice starting point for the hackathon. At least the organizers who prepared the environment definitely learned a lot while preparing the hackathon setup! It was a great experience! Even if e.g. Docker, Jenkins and the basics of CI were familiar in theory level for most of the participants, it was exciting to dive much deeper into the practical challenges of these tools!

Initially, we had prepared a CI setup for OWASP Juice Shop application. Juice Shop is a web application that intentionally contains typical web application vulnerabilities, and has a nice set of unit tests and end-to-end tests. (The project is located here: https://www.owasp.org/index.php/OWASP_Juice_Shop_Project) This project was forked into own repository under owasp-helsinki GitHub group and a Jenkins pipeline was created to build and deploy the Juice Shop as a Docker container.

We had three tracks in the hackathon:

The main goal of the hackathon was to add security to CI pipeline, by using open source tools. The maturity and applicability of these tools for automated use in a CI pipeline was initially unknown. Many of these tools are developed under an OWASP project. Each track was responsible of investigating and configuring the tools relevant to their track, and see how applicable they are.

We had six Amazon AWS Medium EC2 instances that was accessible from the hackathon Wi-Fi network.

The following diagram describes the setup: 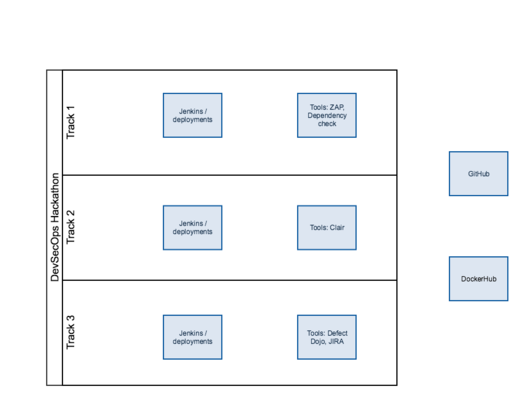 The AWS setup for the hackathon

Every track had two instances. One instance was for running Jenkins pipeline defined in GitHub and running the target Juice Shop Docker image from Docker Hub. The other was for installing the required testing tools. We wanted to keep the jenkins/deployment environment stable and to allow flexible installation for the tools.

We shared owasp-hackathon SSH private key and a proper config file for all participants. Network access to the servers was limited only to the wi-fi network of the hackathon venue. Accesses from all servers to all servers were opened at AWS level both from their private and public IP-addresses, as the traffic was initially blocked. It was also noteworthy to see that even though the servers were opened at the same time, the public IP-addresses were in totally different B-class networks!

Basically the pipeline had initially 5 stages. Stages are the different phases in Jenkins pipeline, that can be considered as "scripts" and measured independently.

The event was basically divided into two parts: before-pizza and after-pizza.

After the first section, the tracks gave a presentation of the achievements and their intended next steps. Around 22:30 we started to go through the final achievements and had a quick wrap-up of the results.

The following simplified diagram summarizes the achievements of the hackathon. We did not have time to bundle every possible security testing tool to the pipeline, but each track chose the optimal location for each stage for the tools.

Here is more complex, and more accurate version of the Pipeline diagram with all the stages that were in the final pipeline.

As we can see, this diagram looks much more complex than the one we initially had in mind before the hackathon (presented here: https://www.owasp.org/index.php/OWASP_Helsinki_DevSecOps_Hackathon). But the same basic stages are there, but split in more specific locations based on the tool's applicability.

The tracks contributed (at least some) of their work to OWASP Helsinki's GitHub repository.

Testing branch chose Clair as their tool for testing the vulnerabilities in the docker container. Clair assumed the target to be in a Docker Hub or similar public location, and the team spent time to make it available for local testing. In the end it was also realized that the images can be pushed to Docker Hub with a tag (e.g. "testing"), to prevent the image to be run in any real environment.

(MORE INFORMATION TO BE INSERTED HERE)

Dependency Check scan was added as part of a build process in the Jenkinsfile. The analyzer was configured to read the npm's package.json file. The detailed analysis report was seen in the HTML report (but was not analysed further for detailed findings). Getting the check work as a Jenkins plugin in the pipeline involved setting up a missing directory for a feature that was not needed in the first place, but could not be disabled.

OWASP Zed Attack Proxy (ZAP) was integrated to the build pipeline in two phases. First, because ZAP doesn't really know a whole lot about the target application, it needs to be taught how to log in and navigate the functionality. For that the team used Juice Shop's end-to-end tests, so that the testing was done with ZAP acting as a passive proxy, recording the traffic. That involved reconfiguring end to end test to use ZAP as a proxy, but unfortunately that did break some of the test cases for unknown reason. Juice Shop does use socket.io in communications, and finding correct ZAP configs (connection timeouts etc) might have fixed that.

Second, Jenkins plugin for ZAP was used to scan the target application. For that the recorded ZAP session was imported to Jenkins ZAP plugin.

One possible concern with the setup was that the target application used JWT for maintaining authentication, but the expiration time for tokens turned out to be long enough so that they were still fresh after running the first phase. (I.e. security scanning could use the same tokens as end-to-end test.)

Something to look at to make ZAP work more reliably, could be https://github.com/continuumsecurity/bdd-security, which was not assessed during this hackathon.

Plugin installations and configuring was done directly at Jenkins, which ran in a container, so it was not a persistent way to store them.

The goal of this track was to apply vulnerability management practices.

Track started by investigating the Defect Dojo tool. It was quite straightforward to understand the data model, which contained:

They created a business critical product type, and created a product called "Juice Shop". First they played with different engagements and tests to find the proper way of using the system in vulnerability management. Then the importing capabilities were tested from ZAP tool. This worked well, but importing an OWASP Dependency checker file crashed the system, which was probably due to a newer file format that the system expected. Creating findings manually worked well.

Lot of time was spent trying to figure out how to import files via the API. Eventually, a nice script was pointed in the Defect Dojo slack channel: https://github.com/aaronweaver/defectdojo_api/blob/master/examples/dojo_ci_cd.py. There was not enough time to make this work properly in the pipeline, as the proper way of usage of that (API keys, etc) was found too late. However, this probably could take it a bit further.

JIRA integration took a lot of time. The JIRA instance itself was easy to run as a docker container, short configuration. Defect Dojo had generally a good documentation and also instructions to setup JIRA bidirectional integration. However, we had already created the product. Enabling JIRA did not enable JIRA configuration options for the existing Juice Shop project. After a long struggle, we asked for help at the Slack channel again. Got some answers from the developer, and then we tried to create a new project, and voilá, the JIRA options appeared to this new product. However, we could not get any JIRA issues to be created, and thus could not test the JIRA webhook based JIRA→DefectDojo integration.

This track was evaluating this pipeline with Defect Dojo / JIRA etc. form NIST vulnerability management program perspective. They found that quite many areas are actually not covered by these tools, but a quite good coverage can be achieved by applying some processes especially to JIRA -> Developers, Admins and Decision makers. Initial slideset on this topic was created, but it will probably still evolve.

Possible observations/bugs were detected during the hackathon:

The most obvious thing we learned was that the tools we tested are not yet mature to be easily bundled into a CI pipeline. We had many experienced people trying to make these tools work. Even though the tools generally had quite good documentation, our use cases seemingly were not the typical use case scenarios. Therefore, at the current state, we think that implementing security into the CI pipeline with the open source tools that were used in this hackathon, may be slow and expensive. Many of the features are not very well documented, and they contain bugs that are time consuming to debug.

During this hackathon, we did not get the whole "ideal" process working, so we don't know what kind of practical challenges it might have. However, some thoughts rose into mind:

Generally this hackathon was considered to be a success what comes to learning. We had a question round in the end, and every participant had a good learning experience, both security tools and the world of CI pipelines and Docker. CI pipelines generally are becoming more and more familiar concept, but security testing bundled to that is still something not many are actively doing. This hackathon was a journey to find out reasons why, and even in this short time we were able to conclude that this area still requires more development and community work to make this more practical and straightforward to start be used daily as a part of CI.

If you have been building or seen working pipelines with these tools (or some other) bundled, please let us know how well it has worked. We know that there are also commercial vendors that are actively making their tools CI/CD compliant, and we are also interested in hearing of success stories related to any free or commercial tools, with practical examples how they are used, and how well they work.

It would be really nice to see the whole pipeline with all stages working, as there are not many good real life practical examples available. Many high level diagrams have been seen in many presentations.

During the hackathon we found an OWASP project AppSec Pipeline which looks interesting: https://www.owasp.org/index.php/OWASP_AppSec_Pipeline#tab=Main. This definitely is worth looking a bit futher, even though the latest activities seemed to be from 2015.

If anyone has pointers to good and practical CI/CD-pipelines with security tools bundled in, we are interested to hear about those!