The Hatkit Datafiddler is a tool for performing analysis of captured http traffic. It currently consists of two main views, one table-based and one tree-based. These views allow the user to study different aspects of the http traffic, with very high degree of configurability. The tool is also meant to be a framework which can utilize existing tools analyze traffic.

It is written in Python with a Qt-based UI and uses a MongoDB database. It has a sister-project, which is the Hatkit Proxy

First of all, visit BitBucket download page to check which is the latest release. Then get it:

Datafiddler will tell you about any missing dependencies with something like this:

Fetch them via your favourite package manager (on *nix systems. Windows is currently not endorsed). Naturally, you need a MongoDB also. MongoDB is available either from the package repositories or from MongoDB download section.

If all goes well, you should be met by this screen, where you can choose which session to use. Sessions are really just databases, but Datafiddler only lists the databases in your MongoDB which contain a collection called conversations. 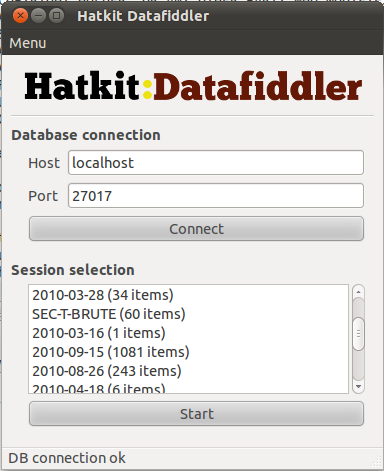 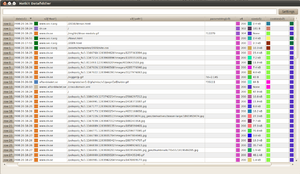 An example of how the table view window can look 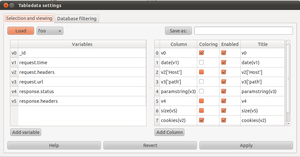 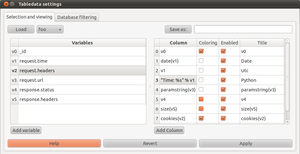 Another example, using a raw python expression in the definition for column 3 and "Python" as column title 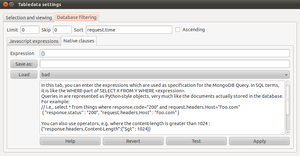 The tabledata settings also has filters 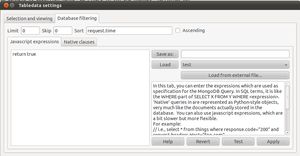 The filters can be arbitrary javascript expressions

The table view displays data in a 1:1 mapping, where every line in a table corresponds to one 'object' in the database. One 'object' contains the request, the response and some extra data. What is special about the Datafiddler is that what you see here is fully customizable.

If you select Settings, you will be met by the settings-window. This window gives you tools to define what is displayed in the table view to suit your current task.

The section below is pretty technical. You don't have to know python or javascript to use this tool, Datafiddler comes with predefined expressions and views that you can use. When you learn the ropes a bit, you can just make modifications to these and you should be fine.

On the left side, there are variables. For each object which is fetched from the database, these expressions determines exactly what parts are fetched and places these parts, into python variables with the names v0 and onward. On the right side, there are the actual definitions of the columns that are shown in the table. These column definitions are python expressions which are evaluated at display-time, and are therefore able to either display a variable directly or perform operations on them and display the result.

For example, a database object stored by Hatkit Proxy always contain these fields:

This means that this object introspection can be performed either inside the database - which is using javascript, or in the application itself, using python. Example:

Worth mentioning though, is that accessing a non-existant attribute (or member) in javascripts returns undefined:

While in python, a similar operation yields exception sooner:

Also, it makes sense to fetch only what is required for the kind of view that you are interested in. If you are analysing session tokens, it is less resource intensive on your machine not to fetch the html content of each response.

What to show: Database Filtering

How to show it

Once objects or part of objects have been loaded into variables , it is possible to perform operations on these objects using python. It is possible to use arbitrary python statemenets, but a set of so called 'transformers' are implemented specifically for the purpose of analysing http traffic:

If you have an idea for a transformer which would be nice to have, please send a proposal to the mailing list (or if you can, implement it in python and send the patch).

If you are investigating a scenario where you have two different users on different browsers, you may want to be able to see which user a http dialogue concerns. One way to do that is to have a column where the cookies are displayed. However, this eats up a lot of screen real estate, and the actual bytes displayed are not interesting. If you have such a column, you can instead toggle to 'Color' checkbox. The coloring takes any input data (such as cookie string) and hashes it into a colorvalue, which is displayed instead. In the scenario described above, the result may be that one user has a blue square in that column while the other has a green one.

The table view (and the upcoming third-party view) supports database filtering. A database filter is a set of expressions which are evaluated in the database, and determines which items are returned in the result of a given query. Note: This is much like the WHERE-part of an SQL statement (on steroids).

The filter contains two tabs. One is for 'native' expressions, where the syntax is a standard javascript object notation. Example below: a filter that returns only pages where (url-)parameters were present in the request. 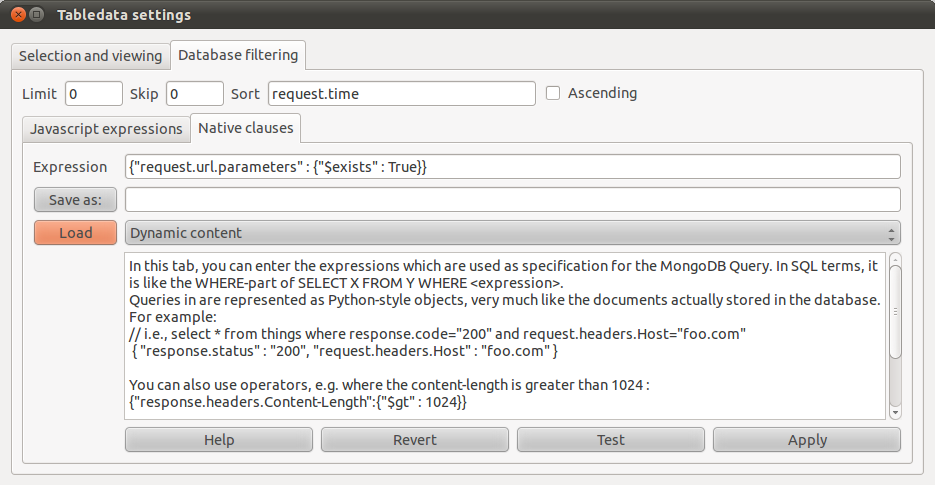 Some example operators which can be used:

It is also possible to use regular expression in the filters. For further information about how filtering works, and examples of operators which may be used, see the MongoDB documentation

In the other tab, you can enter javascript expressions (a V8 engine is embedded inside the database). Simply enter a function which returns true if the object should be returned, false otherwise. Example below: a filter which only returns items where one of the request (url-) parameters were present in the html response - i.e reflected content. 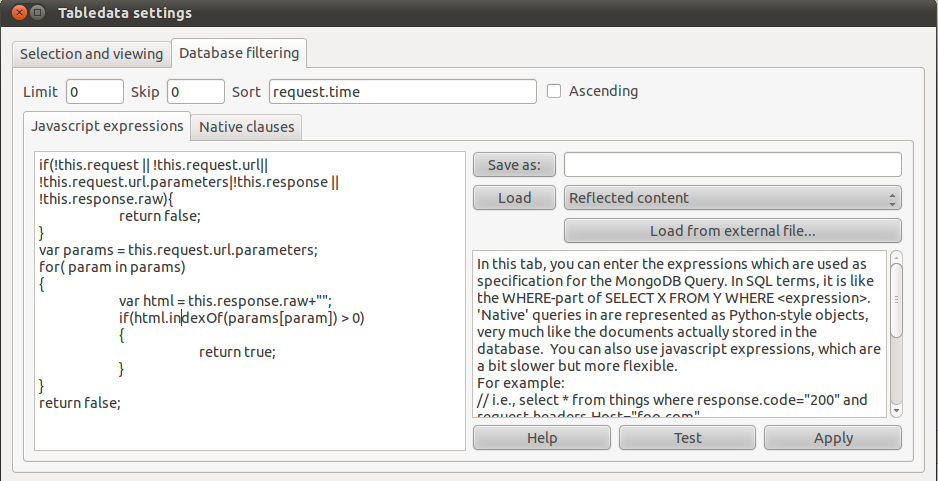 You can click 'Test' to see if the filter works. Javascript errors should be visible in the mongodb console, and the number of matches should be shown in the text pane: 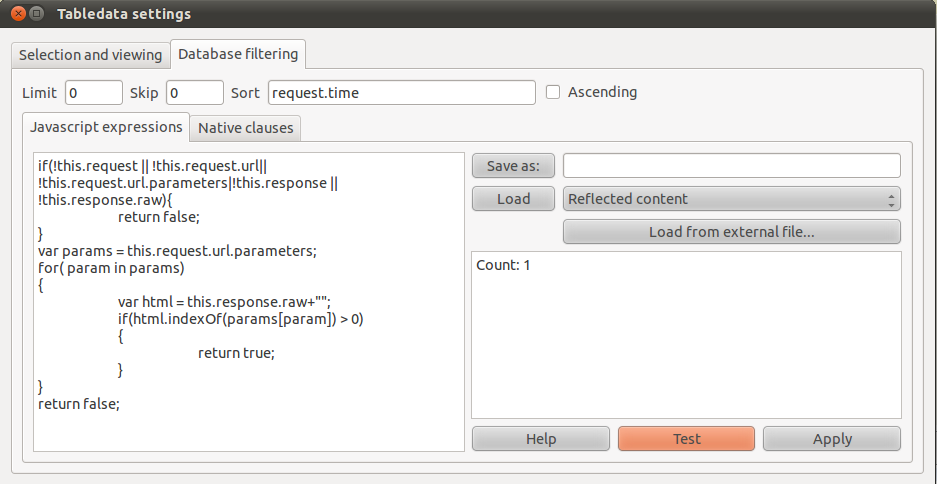 If you write a good filter, you can click "Save as" so you don't have to retype it next time. A good set of standard filters for different purposes is planned for inclusion at a later stage. In the meantime, if you write any handy filters you are encouraged to post them to the datafiddler mailing list.

If you don't already use Mercurial, first do

Then fetch the code:

After that, it's smooth sailing. If you have something to commit, you can create a bitbucket-account create a 'fork' there, where you can publish changes which can then be pulled into the main repository.