How to create a general purpose input validation system

In this elaborately and complexly connected world of the Internet, designers and programmers are forever expected to exercise vigil against attacks that threaten to bring down one of the greatest business enablers; Software Applications. Applications are constantly probed for vulnerability and when found to be vulnerable, are attacked with sustained belligerence. This hurts the business, the designer’s reputation and the programmer’s self-esteem. The mention of cross site scripting (XSS) threats raises this specter, which has most programmers ducking for cover. From programming school up, we are exhorted to validate all inputs. Trust no one, we are told. But then, as always, practice strays away from learning. Programmer resilience in the face of such threats has always brought about solutions that neutralize the threats and for XSS too there are validation frameworks and validation controls. But then, with increased proliferation of SOA, a html based form is not necessarily the only source of input to an application. Trust no one. And then, there are applications that are already deployed and vulnerable. Re-factoring such applications can be cumbersome and expensive. This article endeavors to bring forth a definition system which works in collaboration with a validation system to protect an application from attacks. The idea is much like building a moat around a fort. The application is not concerned with the validation system, other than lowering the draw bridge to accept valid inputs!

And it is best for an application's wellbeing that all of these inputs are validated against defined rules. The approach the validation system should take is, to have a pre-processor which will convert each of the inputs to a defined XML document instance and validate this XML document instance against a defined Schema document. With the schema document defining the structure of the input that the application will receive, the data type for each input field and the boundary conditions for each input field, this validation process will cover most input scenarios for almost all applications. There is no need to write any specific code; just the appropriate configuration. There are however, cases where the content or data might have a defined boundary and yet lead to the application collecting and persisting malicious input. This is particularly the case with free-form text or the string data type. In such situations, the content or value of the input must be examined for unauthorized inputs - like script tags or SQL. To say it with a picture, the system would look thus: 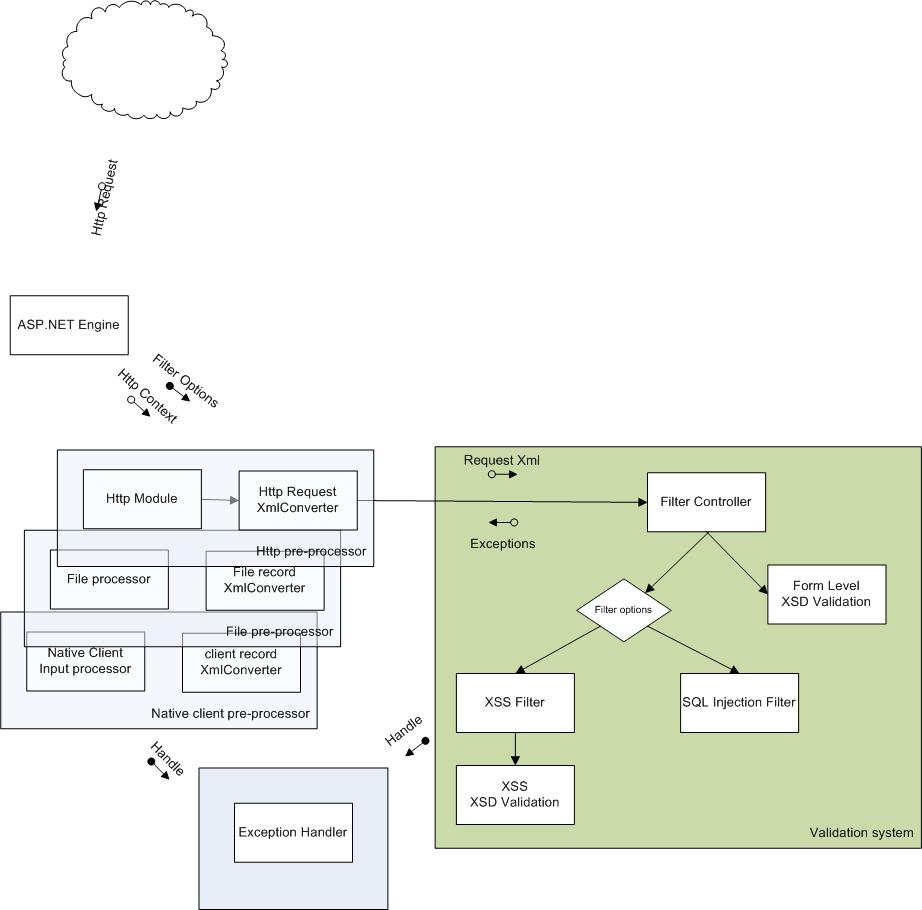 The pre-processors are kept outside the scope of this application for each input situation will require specific handling. For instance, files with voluminous data might want to incorporate threading logic and work by splitting the files into record batches. Similarly, the exception handling system is kept out of the system, for each site or application would demand specific handling of exceptions. However, a reference implementation for each input type should be built so that the effectiveness of the validation system can be demonstrated.

The tedium of creating and maintaining XML Schema documents for each input set that an application receives is certainly a retardant for developers to design and use such a validation system. Yes, there are lots of tools, but… Be that as it may, one thought process is to build a utility which, at design/development time will capture the input field definitions, the data types and the permissible value ranges and generate the appropriate schema document, with appropriate restrictions. A forms based applciation is best suited for this, which would help a programmer create a XML schema document based on specified input parameters and constraints. This generated schema can then be used, at run time,to validate the contents of the input / message. An appropriate pre-processor will be requried (unless the reference implementation is being used) which would create the XML instance document, to be validated with the defined schema.

The input parameters of the message that ought to captured through a windows form are suggested to be:

Screen-shots of a sample implementation of such an utility is shown below: 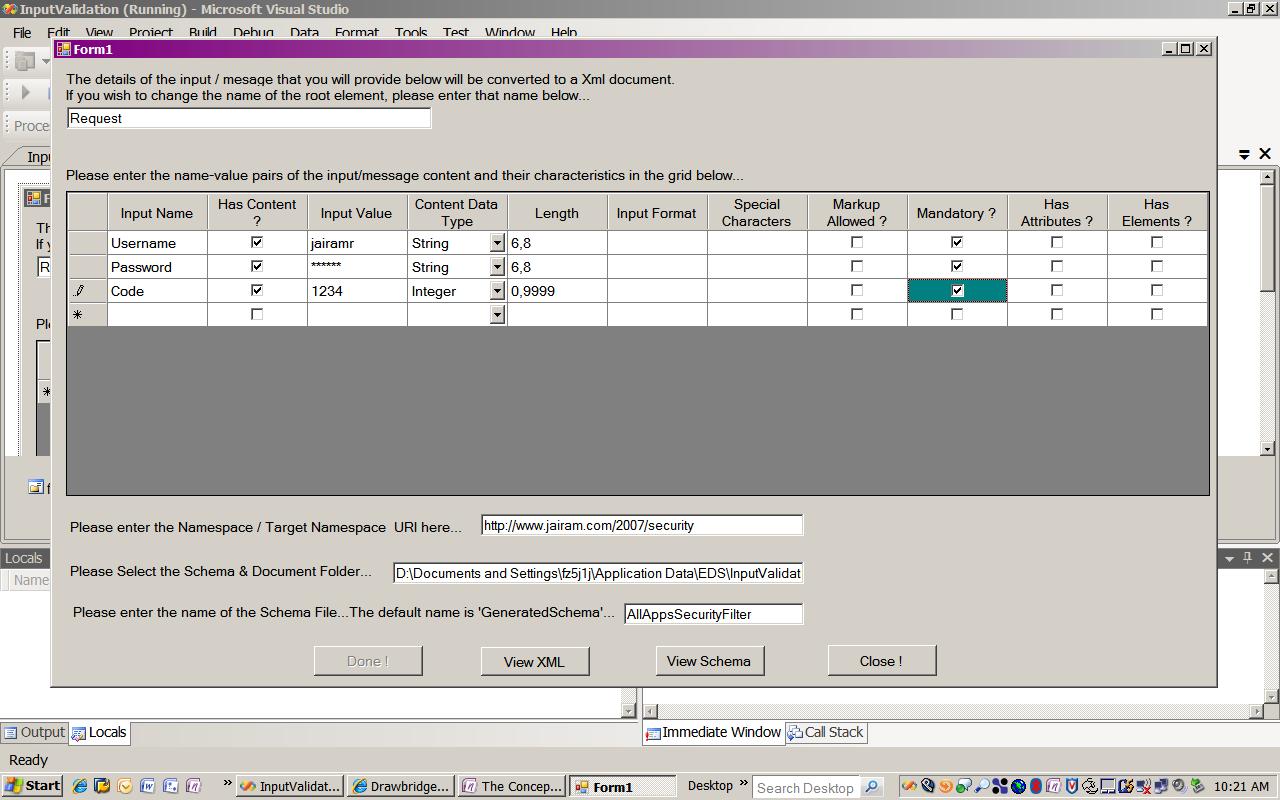 With a robust definition system, the characteristics or meta-data of the inputs that an application would receive can be translated in to an XML Schema document, which would it turn facilitate the validation of content, at run-time.

Thus, for the validation system, all possible forms of inputs must be canonically represented in UTF-8 encoded form. All encoded / encrypted formats of inputs must be processed appropriately, before it is presented to the validation system. This task is left to the pre-processors. For example, in the pre-processor for httpRequests, there would be one component that processes http headers, one that handles cookies, one that handles query strings and one that handles request parameters. Once the inputs are reduced to their string representations, these pre-processor components will then create the XML document instance which will be validated against the configured schema document for that request.

The content type definition along with the value, length and format restrictions defined in the generated schema will allow little space of mal-content. The schema validation system will throw validation exceptions, and will not require the validation system to process input content (data). Two situations when content must be examined are when the programmer specifies the length of a input to be large enough to allow for mal-content (for example input string of max length of 80 characters) or when the user input can contain (undefined in the schema) markup information, like HTML. For such situations, each know vulnerability would use specific RegEx expressions to parse the content and raise exceptions when pattern matches are found. This approach is based on the idea that 'we know what we don't want!'. The pre-processor would that handle the exception depending on how it is programmed - leaving the application in a safe state.

A brief description of the generated XML schema document would be thus:

A <xs:complexType> element node should be created for the root element and added to a fresh xml schema document instance. After this is done, each defined input element, along with the specified meta-data, in the definition utility should passed to a SchemeGenerator class instance. The SchemaGenerator would then create an appropriate xml schema element. The xml schema definitions for the input elements could be created as

1. <xs:simpleType> with an appropriate 'base' type definition. The other input paramteres would help in specifying <xs:restriction> facets.

2. <xs:complexType> elements, with either <xs:simpleContent> or <xs:complexContent> depending on whether the input element is defined as 'not containing' or 'containing' markup information.

For the string data type, the base derivation (restriction) would be such that the value space must be devoid of any markup text. By implication, <script> tags are trapped. If the programmer chooses to allow markup text, only <script> tags, SQL construct patterns, should be trapped, while other markup text is passed as valid. This will neutralize most of the trivial attacks. In many cases though, the input value minimum and maximum length, if appropriately chosen, the secondary restrictions of <xs:minLength> and <xs:maxLength> will trap the expanded text.

The schema validation system for data types for numeric values <xs:integer>, <xs:decimal> <xs:float> etc will trap <script> tags. This is further supported by the <xs:minInclusive> and <xs:maxinclusive> facets.

The end objective of this validation system is that no coding should be needed for validating inputs to applications - just specification and configuration! When the pre-processors are developed, that would indeed be the case. During the development of the input forms or input messages for applications, the programmer or designer should generate the per input schema document (specification) with an appropriate target namespace. These documents must then be saved in a appropriate folders and the pre-processors configured to use them. The pre-processor module must then be configured into the applications’ processing chain, for instance in a http module in the ASP.NET engine. And a configuration system should map the input to a corresponding document, which the validation system will use.

I, for one, do not believe that an application should passively protect itself from attacks and fill up log files with incidents. I believe that the protection net must extend to preventing access. For example, if a input message fails validation, it could be a XSS attack or quite simple a denial of service attack. Since we have trapped an exception, we can also capture and pass on, the offending user’s or application’s context to an network management application. The management application can then, either through rules or through human decision, block the offending user or application from accessing the target application or system.