This chapter was restarted. The Chapter was officially founded by Galoget J. Latorre Ch. as a Project of Hackem Research Group at National Polytechnic School (Quito, Ecuador) in May 2012.

The chapter activities started the same month, after the OWASP Latam Tour 2012 that was celebrated at National Polytechnic School (Quito - Ecuador) with the presence of Fabio Cerullo who is part of the Global Education Committee and OWASP Ireland Chapter Leader.

For the Chapter the following resources were created by our members:

The chapter aims to be active on a National wide level not only by participating at different IT events but also by organizing free and open for everyone conferences, workshops and meetings about Application Security and Information Security in general.

Also a Special Course in the University was opened and is dictated by the Chapter Leader in the Systems Engineering Faculty:

If you want to contact our chapter: OWASP Foundation

Since our foundation every semester we visit new students from Systems Engineering Faculty introducing OWASP Ecuador Student Chapter, our activities, projects, meetings and our work.

The OWASP Ecuador Student Chapter is officially founded by Galoget J. Latorre Ch. in National Polytechnic School (EPN) with the presence of Fabio Cerullo and Ramiro Pulgar after the OWASP Latam Tour 2012 .

A conference given by Galoget Latorre and a CTF prepared by our chapter about OWASP Top 10 in the Software Freedom Day 2012 at EPN.

Our Chapter was invited to Campus Party Quito 2012, and our leader gave 3 Conferences related with Security:

After every speech, our team invited people to join our chapter and participate on it.

Also our Chapter Leader was the Winner in a Malware Analysis Contest organized by ESET, after the award, Galoget Latorre introduced our chapter inviting people to participate on it.

A Special Course in our University was re-opened and was dictated by the Chapter Leader in the Systems Engineering Faculty:

Participation and Triumph of the Chapter Leader in "Cybersecurity for the Next Generation - South American Round 2013" organized by Kaspersky Lab, after the award the Leader spoke about the Local Chapter in his University inviting people to participate on it.

Participation and Support on OWASP Latam Tour 2013, part of our chapter (a team of 4 members) won the 2nd place of OWASP Latam Tour CTF organized by OWASP Ecuador Chapter, for more details see:

At the same time there was a Global CTF for Latam organized by honeyn3t, our Chapter Leader, Galoget Latorre, was part of the Top 30 Scoreboard for Latin America. 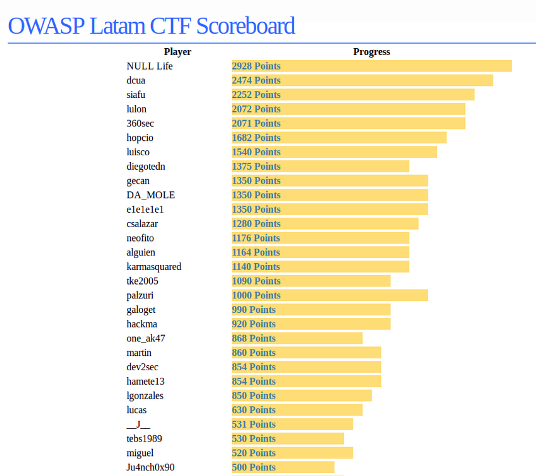 A conference about "Hacking an Insecure Server in 5 Minutes - Ethical Hacking (OWASP)" was given by our chapter leader: Galoget Latorre and a CTF was prepared by our chapter members.

The objective of this Conference was to show the risks about Web Applications that were developed without Secure Coding Principles, after the event our leader invited people to join our chapter.

Our chapter organized a Conference about Internet Privacy and Web Security Risks that was given by Ola Bini (from ThoughtWorks), more info:

Our chapter again is invited to Campus Party Quito 2013 and our leader gave 4 Conferences related to Security and our chapter: