Credential stuffing is the automated injection of breached username/password pairs in order to fraudulently gain access to user accounts. This is a subset of the brute force attack category: large numbers of spilled credentials are automatically entered into websites until they are potentially matched to an existing account, which the attacker can then hijack for their own purposes.

Credential stuffing is dangerous to both consumers and enterprises because of the ripple effects of these breaches. For more information on this please reference the Examples section showing the connected chain of events from one breach to another through credential stuffing.

Credential stuffing is one of the most common techniques used to take-over user accounts. 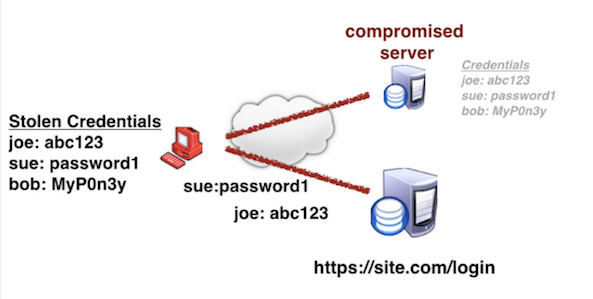 Below are excerpts taken from publications analyzing large-scale breaches. Evidence supports that these breaches were the result of credential stuffing.

This connected chain of events from Sony to Yahoo to Dropbox excludes JPMC. The JPMC breach came from a separate and unrelated source. We know that the JPMC breach was caused by attackers targeting an unrelated third-party athletic race/run site for credentials to use against JPMC.