Authorization issues cover a wide array of layers in a web application; from the functional authorization of a user to gain access to a particular function of the application at the application layer, to the Database access authorization and least privilege issues at the persistence layer. So what to look for when performing a code review? From an attack perspective, the most common issues are a result of curiosity and also exploitation of vulnerabilities such as SQL injection.

Authorization is a very bespoke area in application development. It can be implemented via a lookup table in a users' session which is loaded upon successful authentication. It could be a real-time interrogation of a backend LDAP or database system upon each request.

How to Locate the Potentially Vulnerable Code

Business logic errors are key areas in which to look for authorization errors. Areas where authorization checks are performed are worth looking at. Logical conditional cases are areas for examination, such as malformed logic:

For classic ASP pages, authorization is usually performed using include files that contain the access control validation and restrictions. So you usually will look for something like

We have an additional issue here: Information disclosure, as the include file might be called directly and disclose application functionality, as ASP code will not be executed given that Inc extension is not recognized.

One area of examination is to see if the authorization model simply relies on not displaying certain functions which the user has not authorization to use, security by obscurity in effect. If a crawl can be performed on the application, links may be discovered which are not on the users’ GUI. Simple HTTP Get requests can uncover "Hidden" links. Obviously, a map on the server-side should be used to see if one is authorized to perform a task, and we should not rely on the GUI "hiding" buttons and links.

Disabling buttons on the client side, due to the authorization level of user, shall not prevent the user from executing the action relating to the button.

By simply saving the page locally, and editing the disabled=true to disabled=false and adding the absolute form action, one can proceed to activate the disabled button.

The Database: The account used by the application to access the database. Ensure least privilege is in effect.

The <authorization> element controls ASP.NET URL authorization and the accessibility to gain access to specific folders, pages, and resources by users/web clients. Make sure that only authenticated users are authorized to see/visit certain pages.

The roleManager Element in ASP.NET 2.0 is used to assist in managing roles within the framework. It assists the developer as not as much bespoke code needs to be developed. In web.config, to see if it is enabled check:

In Apache 1.3 there is a file called httpd. Access control can be implemented from here in the form of the Allow and Deny directives. allow from address is the usage where address is the IP address or domain name to apply access to. Note this granularity is host level granularity.

Order Deny,Allow
Deny from all
Allow from owasp.org


Above, all is denied apart from owasp.org

To move the authorization to the user level in apache we can use the Satisfy directive.

Check authorization upon every user request.

Authorization being performed upon all requests from external entities 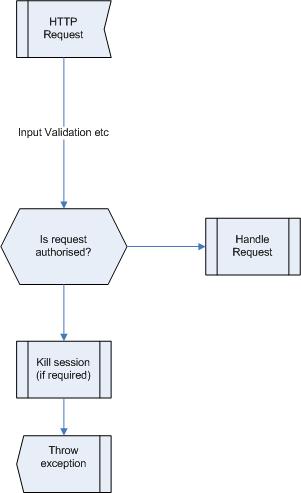 Building the GUI based on the user’s authorization. "If he can’t see the control he won’t be able to use it"

Common enough error. If a user has the URL, the functionality can still be called. This is due to no authorization check being performed upon every HTTP request.

Operating System injection can be used to totally ignore authorisation constraints. Access to the underlying host is a key objective of system breach. The application is simply a conduit for access to data.

SQL injection can be used to circumvent authorisation. Again, systems are breached to obtain underlying data, they are not breached for the applications themselves. SQL injection is in essence accessing the data via an "out of band" channel not intended by the application.

Insecure class files, folders in deployment may be used to attack an application outside the actual application itself.

Impersonation can obviously be used to gain unauthorised privilege.

In a multi user, multi-threaded environment thread safety is important as one may obtain another individuals session in error.