No code metric will ever be able to substitute for a code review. There is a long list of quality and security characteristics that can be considered when reviewing code (such as but not limited to correctness, efficiency, portability, maintainability, reliability, securability, etc. sometimes called the '-ilities'). In this paper we will discuss metrics to reach the quickest and best solution for a given code review. No two code review sessions will be the same so some judgement will be needed to decide the best path. Ideally all code needs to be reviewed, but let's face it, not all code can be reviewed. So the best approach is to review the code with the highest risk. 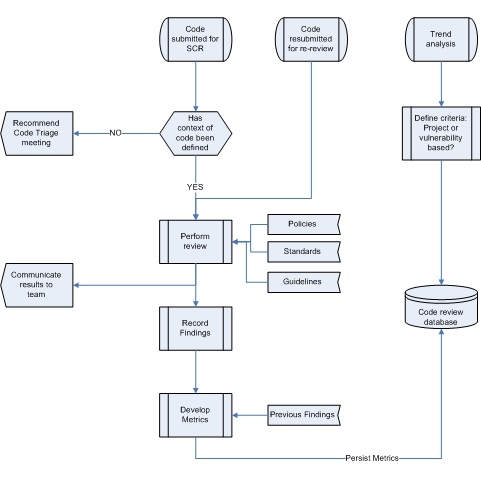 The figure above describes the use of Metrics throughout the code review process.

The average occurrence of programming faults per Lines of Code (LOC). This gives a high level view of the code quality but not much more. Fault density on its own does not give rise to a pragmatic metric. Defect density would cover minor issues as well as major security flaws in the code; all are treated the same way. Security of code can not be judged accurately using defect density alone.

The count of the executable lines of code. Commented-out code or spaces don't count. This is another metric in an attempt to quantify the size of the code. This gives a rough estimate but is not particularly scientific. Some circles of thinking believe that the estimation of an application size by virtue of LOC is professional malpractice!

The estimation of software size by measuring functionality. The combination of a number of statements which perform a specific task, independent of programming language used or development methodology.

Similar to defect density, but discovered issues are rated by risk (high, medium & low). In doing this we can give insight into the quality of the code being developed via a [X Risk / LoC] or [Y Risk / Function Point] value. (X&Y being high, medium or low risks) as defined by your internal application development policies and standards.

Cyclomatic complexity (CC) is just one static analysis metric used to help establish risk and stability estimations on an item of code, such as a class or method or even a complete system. It was defined by Thomas McCabe in the 70's and it is easy to calculate and apply, hence its usefulness.

The McCabe cyclomatic complexity metric is designed to indicate a program's testability, understandability and maintainability, etc. This is accomplished by measuring the control flow structure, in order to predict the difficulty of understanding, testing, maintaining, etc. Once the control flow structure is understood one can gain a realization of the extent to which the program is likely to contain defects. The cyclomatic complexity metric is intended to be independent of language and language format that measures the number of linearly-independent paths through a program module. It is also the minimum number of paths that should be tested.

By knowing the cyclomatic complexity of the product, one can focus on the module with the highest complexity. This will most likely be one of the paths data will take, thus able to guide one to a potentially high risk location for vulnerabilities. (This is where the OWASP Code Review Top 9 comes in handy. [1]) The higher the complexity the greater potential for more bugs. The more bugs the higher the probability for more security flaws.

Does cyclomatic complexity reveal security risk? One will not know until after a review of the security posture of the module. The cyclomatic complexity metric provides a risk based approach on where to begin to review and analyse the code. Securing an application is a complex task and in many ways, complexity is just one enemy of security. Software complexity can make security and corruption hard to detect. Complexity of software increases over time as the product is updated or maintained.

Security has become a major component of software quality. Functional testing and software validation contribute to the quality of a given body of code, and yet allow the software to remain insecure and potentially vulnerable. An insecure product is not a quality product.

As the decision count increases, so does the complexity and the number of paths. Complex code leads to less stability and maintainability.

The more complex the code, the higher risk of defects. One could establish thresholds for Cyclomatic complexity:

0-10: Stable code. Acceptable complexity
11-15: Medium Risk. More complex
16-20: High Risk code. Too many decisions for a unit of code.
Modules with a cyclomatic complexity higher than 30 are extremely complex and should be split in smaller methods. Any module with a complexity greater than 50 is considered untestable.

Depth of inheritance: measures the inheritance level of a method. The deeper the level the greater the complexity involved in predicting its behavior and more importantly the impact changes will have.


As the complexity of software increase so does the probability to introduce new errors.

Other aspects of software complexity

These are just some of the metrics to consider in an attempt to improve your code. From here things become more complex.

This metric can be used to get a rough idea of the required duration to perform a code review. The inspection rate is the rate of coverage a code reviewer can cover per unit of time. From experience, a rate of 250 lines per hour would be a baseline. This rate should not be used as part of a measure of review quality, but simply to determine duration of the task.

This metric measures the defects found per unit of time. Again, can be used to measure performance of the code review team, but not to be used as a quality measure. Defect detection rate would normally increase as the inspection rate (above) decreases.

Measured as a % of LoC of function points, the code coverage is the proportion of the code reviewed. In the case of manual review we would aim for close to 100%, unlike automated testing wherein 80-90% is considered good. In order to ensure that the code coverage standards are met, some organizations might implement a safety check during the build process, so the build will fail if there are any piece of code that has not been tested or if it the coverage is under the desired percentage. The higher the percentage of code coverage, the better to ensure quality and prevent logic errors. When it comes to Unit Testing, code coverage is an important element because one might determine how to write unit test that covers all the possible execution paths and avoid any logic error that might cause a wrong behaviour in a piece of software at runtime.

The rate at which upon re-inspection of the code more defects exist, some defects still exist, or other defects manifest through an attempt to address previously discovered defects.