This is just a place to gather some ideas for the 2015 reworking of the Mobile Top Ten. It's totally unofficial open musings about truth, beauty, and justice.

This is the "Mobile Top Ten" what? It's the top 10 "stuff people tend to screw up", but here are some important questions.

Who is it For?

Do we intend this to be a tool that infosec / appsec people use? Do we intend lay people to make use of it? (e.g., developers and non-mobile IT security people) What does the target audience need to get from it?

(Paco's opinion) We need to have a narrative: If you found functionality that does X, it is probably in bucket A, unless it is also doing (or not doing) Y, in which case that's bucket B.

(Jason) By looking at some data sets it becomes clear there is a doctrine that some consultancies use to do mobile testing. Some did not contribute m1 data, because they consider mobile security client-only. The same applied to m10. In addition, a couple of datasets used CWE IDs. These were harder to parse because generic CWE's do not specify if the vuln is client or server (and in a lot of these cases the vuln could be either). As Paco stated, code quality, source level findings are hard to categorize as well.

I see “storing passwords in the clear” as a very common finding among their data. It gets classifed as M5 poor authentication, M2 insecure data storage, M4 data leakage, and sometimes M6 (broken crypto).

I see “storing session tokens insecurely” as a common finding. It is getting classified as M9 (session handling) and M2 (insecure data storage). I wonder openly whether passwords and session tokens are really that different.

They only have 18 distinct things they report on, though they have 111,000 data points. Two of the 18 things are double-counted. They appear to be categorised in both M3 and another one.

Communications issues are a problem a lot. But TLS and crypto are tightly coupled. “Communications issues" includes certificate pinning, weak TLS ciphers, improper cert validation, HTTP and plaintext protocols, and more. There’s a lot of overlap with “broken crypto” like using Base64 instead of encryption, hard coded keys/passwords, weak hash algorithms, and so on. How do we tease out “crypto” issues from “communications” issues from “insecure storage” issues?

Some findings are deeply mobile (e.g., intent hijacking, keychain issues, jailbreak/root detection, etc.). They’re really tied to their respective platforms. Is that a problem for us? Does it matter?

These are conclusions proposed from the 2014 data.

At Least One New Category Is Needed

((Paco)) The "Other" category is not the least popular category. It's more popular, by an order of magnitude, than several others. This tells me that if we had a better category that captured "other" findings, it would be a benefit to the users of the top 10.

Combined with the fact that the 3rd or 4th most popular category is "Other", this suggests that 2 or 3 of these are, in fact, not in the "top ten". They may be, for example, 11 and 12 or even higher.

The Existing Buckets are Hard To Use

A few contributors tried to categorise their findings into the existing MT10. When they did, they showed symptoms of difficulty. Some examples in the table below show how MetaIntelli flagged findings in two different categories, and BugCrowd flagged the same kind of finding in 3 different categories. This suggests that the existing MT10 is not clear enough about where these issues belong.

Some Topics that Show Up But Are Hard To Place

There are a few things that show up in the contributed data that do not have a good category to go into.

If someone is doing bad C coding (e.g., strcpy() and similar), there is no good bucket for that. Likewise, misusing the platform APIs (e.g., Android, iOS, etc.) is not well covered. It's hard to place violations of platform best practices (e.g., with intents and broadcasts and so on).

Most of the Android developers use "printStackTrace" in their code, which is a bad practice. Even the Android APK is released in DEBUG mode.

This section explores the critical elements that must be included within all OWASP Mobile Top Ten 2015 categories. Each element is listed below along with a brief description of the appropriate content. The goal is to "test drive" this list of required elements with a sample, non-commital category to verify that the elements adequately cover what is needed within each of the OWASP Mobile Top Ten 2015 categories. Each of these elements has been initially based off the Google Hangout meeting held on April 1 2015.

This element is a unique identifier for the bucket of issues that belong together. In the OWASP Mobile Top Ten 2015 Survey, we found that there were many different audiences that may use the OWASP Mobile Top Ten 2015 for different purposes. As always, there needs to be a generic label that uniquely identifies each bucket of issues. However, there should also be additional labels for the same category that are audience-specific to make it easier for different audiences to identify the category they are looking for. These additional labels will help clarify and differentiate the categories.

This element eliminates any uncertainty or ambiguity that may result from vagueness / broadness in the category labels. It should include "headline vulnerabilities" that made it into the media and help each audience get a "gut feel" for what belongs to this category. In the 2014 list, we found that there were many instances where the same vulnerabilities were spread across many different categories. Hence, the need for this additional element along with a strive towards better categorisation.

This element helps clarify how critical the category of issues is from both a business and technical perspective. During the meeting of April 1 2015, it was proposed that the CVSS classification scheme may be used here as a way of helping guide the audiences in prioritisation of the fixing of the issues.

This element gives practical advice and guidance for category remediation that is relevant to each audience (100-200 words). Each audience may approach the issue of remediation from very different perspectives. For example, an auditor may simply want to know more about whether or not remediation is appropriate. Meanwhile, a software engineer may want to have coding-specific advice. Each audience's concerns must be addressed in this element.

Here, we are testing a particular category to see whether or not the proposed elements for each category are adequate to address each audience's needs. It is important to note that this is a sample category and is not a formal commitment to any final category in the OWASP Mobile Top Ten 2015. It is strictly meant for testing purposes. Members who would like to 'own' particular elements in the category below should 'sign up' and add content where appropriate.

This category focuses on the many available communication channels in the mobile environment and the secure transmission of data through them. If your application is using Wi-Fi, WiFi-direct, Bluetooth, Infra-red, RFIDs, POS devices (with NFC Tags); then this category provides guidance in securing data while in transit. Included but not limited to are plaintext transmission of sensitive data, insufficient authentication of encrypted channel endpoints, insufficient regard to failures in building a properly encrypted channel, poor choice of security mechanisms over distinct networks, etc.

Additionaly, this category applies in the same way to secure data transmission in the Internet Of Things (IoT).

The key differentiator of this vulnerability is that it is concerned about unencrypted or improperly encrypted data being stolen during transmission, not on the device but through the airwaves. 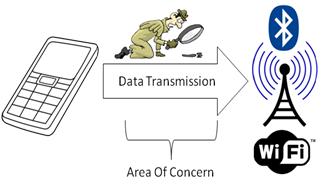 Insecure Data Transmission should not be confused with others in the top 10 such as:

M4: Unintended Data Leakage – Unintended data leakage is a result of insecure data transmission. Once data has been stolen and interpreted it may contain information that is valuable to attackers (leaked).

M6: Broken Cryptography – While broken cryptography does relate to data that has been improperly encrypted, and it may be an input or causes of insecure data transmission, it focuses on the encryption process/technique itself on the device transmitting the data.

Confidential and sensitive data residing on the mobile devices if not fully SSL encrypted during transmission is highly susceptible to eavesdropping. As majority of wireless, mobile devices have capability to use and switch to various home Wifi and public unsecured Wifi. This could be disastrous while giving attackers a glimpse of your personal, non-shareable information which can lead to identity theft and social engineering attacks. Similarly, it applies to those mobile apps also where data transmission is not fully SSL encrypted and failed to perform a Valid SSL Certificate check. Additionally, this might lead further to man-in-the-middle attacks.

Even if the application uses encryption and the device is connected to a public WiFi, an attacker can easily capture all Wireless traffic (as in War-driving). Then attacker can perform offline decryption and possibly have all your sensitive data. Consider the situation where your application server uses TLS1.0/SSLv3. You think it is secure? Nope, it is highly vulnerable to attacks like CRIME, POODLE and Handshake Re-negotiation.

Here's some top-ten possible categories. This is a wiki. Edit them. Change them. Leave comments. Mark it up.

(Jason) As i look through the data I think more and more about how m2 and m4 might be combined.

(Jason) Regarding m10 - Several submissions reported m10 vulns. Unfortunately some were types of services such as binary reputation scanners, that do not have the ability to check for dynamic or code level findings. In order to fix this i recommend a name change or re-working of this category. I want to separate out the delineation of Anti-exploit vs Code Obfuscation/Anti-reversing. Must talk to group about this.