The OWASP Lapse Project is LAPSE+: The Security Scanner for Java EE Applications. OWASP LAPSE Project is an initiative to make available to developers and auditors a tool for detecting vulnerabilities in Java EE Applications. The project aims to put at their disposal a tool based on the static analysis of code, due to the importance and difficulty of this type of analysis to detect security flaws in Java EE Applications. The difficulty of this analysis increases when they face applications consisting of thousands of lines of code or having a complex structure with many Java classes. Hence, OWASP LAPSE Project offers a tool that helps the developer and auditor to carry out the static analysis of code in the most effective and efficient way. The tool that is provided and gives the name to the project is LAPSE+.

LAPSE+ is a security scanner for detecting vulnerabilities of untrusted data injection in Java EE Applications. It has been developed as a plugin for Eclipse Java Development Environment, working specifically with Eclipse Helios and Java 1.6 or higher. LAPSE+ is based on the GPL software LAPSE, developed by Benjamin Livshits as part of the Griffin Software Security Project. This new release of the plugin developed by Evalues Lab of Universidad Carlos III de Madrid provides more features to analyze the propagation of the malicious data through the application and includes the identification of new vulnerabilities. 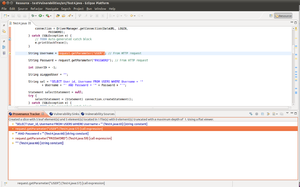 LAPSE+ in action (click to see a bigger image)

Three steps are needed in LAPSE+ for the detection of this kind of vulnerabilities:

The OWASP Lapse Project is free to use. It is licensed under the GNU General Public License version 3.0 (GPLv3).

What is the OWASP Lapse Project?

This project can be purchased as a print on demand book from Lulu.com

Q1
What should you do to avoid these vulnerabilities in your code? - How do we protect Web applications from exploits?
A1: The proper way to deal with these types of attacks is by sanitizing the tainted input. Please refer to the OWASP Guide to find out more about Web Application Security.

LAPSE+ is inspired by existing lightweight security auditing tools such as FlawFinder. Unlike this tool, however, LAPSE+ addresses vulnerabilities in Web Applications. LAPSE+ is not intended as a comprehensive solution for Web Application Security, but rather as an aid in the code review process. Those looking for more comprehensive tools are encouraged to look at some of the tools produced by Fortify or Ounce Labs.

The OWASP Lapse Project is developed by a worldwide team of volunteers. The primary contributors to date have been:

As of February 2014, the priorities are:

Involvement in the development and promotion of OWASP Lapse Project is actively encouraged! You do not have to be a security expert in order to contribute. Some of the ways you can help: