Risk Evaluation: Basic OTPs are vulnerable to HTML Injection and to other more sophisticated techniques, but give to the bank the following important improvements in terms of security:

This authentication measure needs UI redressing or automation to be bypassed. 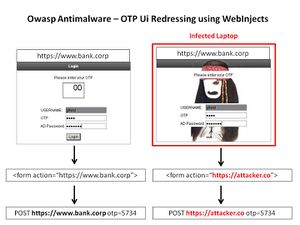 A one-time password (OTP) is a password that is valid for only one login session or transaction. OTPs avoid a number of shortcomings that are associated with traditional (static) passwords. OTPs are difficult for human beings to memorize. Therefore they require additional technology in order to work and this technology may be implemented in software tools or by using external hardware devices (Hardware tokens). Basic OTPs are based on cryptographic One-Way Algorithms and initialized with a different key per each user to avoid impersonation attacks. In addition each token usage is blacklisted and cannot be used a second time to avoid replay attacks. Since basic OTP standards do not have a direct communication with the remote server, they need indirect standards for assuring synchronization with the remote infrastructure. Synchronization can be achieved on time-synchronization between the authentication server and the client providing the password (OTPs are valid only for a short period of time) or computing the number of previously generated passwords and set a range of valid passwords (if the user press to often the button the device will go out of sync).

Even if this technology seems very resilient against malware attacks, it doesn't! Basic Otps can be defeated very easily with User Interface redressing. This attack is accomplished using the infamous features called WebInjects that permit to inject arbitrary HTML into the original Bank Login pages. As we previously said, the Token is valid for a single transaction and is blacklisted after the first usage. Malware attackers will never let the token to arrive at the bank, so the bank can not blacklist that information. To defeat time restriction window, they also may make use of Instant Messaging plugins to have a real time communication of the token to the attacker. 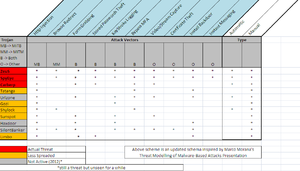