From OWASP
(Redirected from Jonathan Marcil)
Jump to: navigation, search 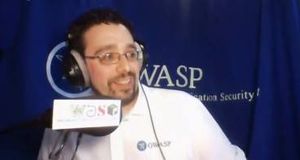 Jonathan was the chapter leader of OWASP Montreal, managed most of the events and did the online community management. He teamed up with various student groups to be present in three universities. He also put most talks online using YouTube and Google Hangouts.

Those implications leaded him to create OWASP Media Project, where we gather, consolidate and promote OWASP content in video format on a central appealing hub. With that project, he achieved to get most of the OWASP conferences content online. In ten months, the project grew to a total of 150 videos that reached 60,000 views with 1,500 subscribers for a total of half a million minutes of watching. After 4 years, it went up to 500,000 views with 13,500 subscribers.

His main occupation is Application Security Engineer, but deep down he is a developer with an agnostic vision of programming languages. He holds a diploma in Software Engineering from Ecole de Technologie Superieure and have more than 15 years of experience in Information Technology and Security.

You may stalk him on

WASPY_Awards_2013 Best Chapter Leader 2013 nomination: While it's actually true that I've did some weeks with 20-25 hours of work while rebooting Montreal's chapter, I do not do that each week..

WASPY_Awards_2014 Best Chapter Leader 2014 nomination: I'm not all the time outside the country! One of the most successful events of 2014 was booked and promoted by myself when I was away but conducted by our partner and team.