Difference between revisions of "What are web applications?"

In the early days of the web, web sites consisted of static pages, which severely limited interaction with the user. In the early 1990âs, this limitation was removed when web servers were modified to allow communication with server-side custom scripts. No longer were applications just static brochure-ware, edited only by those who knew the arcane mysteries of HTML; with this single change, normal users could interact with the application for the first time. 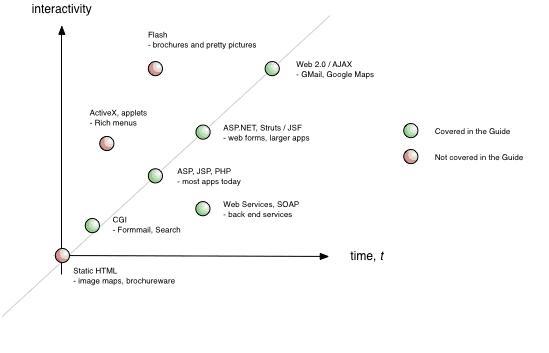 The trend towards increased interactivity has continued apace, with the advent of âWeb 2.0â, a term that encompasses many existing technologies, but heavily features highly interactive, user centric, web-aware applications.

However, this push to make applications as easy to write as possible has a downside â many entry-level programmers are completely unaware of the security implications of their code. This is discussed further in the âSecurity Principlesâ chapter.

Letâs look at the various generations of web application technology.

Common Gateway Interface (CGI) reigned supreme from approximately 1993 through to the late 1990âs when scripting languages took over in a big way.

CGI works by encapsulating user supplied data in environment variables. These are inherited by the custom-written scripts or programs, usually developed in Perl or C. The custom programs process the supplied user data, and send fully formed HTML to the âstandard outâ (stdout), which is captured by the web server and passed back to the user.

Filters can be used to control access to a web site, implement a different web application framework (such as Perl, PHP, or ASP), or to provide a security check. Because filters live within the execution context of the web server itself, they can be high performance. Typical examples of a filter interface include Apache web server modules, SunONEâs NSAPI, and Microsoftâs ISAPI. Filters can be written in C/C++ in order to integrate with the web/app server at a low-level. However, more recently, filters are being implemented in higher level languages, using interfaces like the J2EE filter API.

As scripting languages reached the boundaries of performance and scalability, many larger vendors jumped on Sunâs J2EE web development platform. There are many J2EE implementations, including Tomcat from the Apache Foundation, JBoss and Glassfish.

J2EEâs downside is that it has a steep learning curve which makes it difficult for web designers and entry-level programmers to use it to write applications. While certain graphical development tools make it somewhat easier to program with J2EE, a scripting language like PHP is still much easier to use.

The controller (or application logic) takes input from the users and gates it through various workflows that call on the applicationâs model objects to retrieve, process, or store the data.

As the application is likely to be internationalized and accessible, the data needs to be in the local language and culture. For example, dates cannot only be in different orders, but an entirely different calendar could be in use. Applications need to be flexible about presenting and storing data. Simply displaying â7/4/2005â is ambiguous to anyone outside a few countries.

Models encapsulate functionality, such as âAccountâ or âUserâ. A good model should be transparent to the caller, and provide a method to deal with high-level business processes rather than a thin shim to the data store. For example, a good model will allow pseudo code such as this to exist in the controller:

Stored procedures are not always a good idea â they tie you to a particular database vendor and many implementations are not fast for numeric computation. If you use the 80/20 rule for optimization and move the slow and high-risk transactions to stored procedures, the wins can be worthwhile from a security and performance perspective.