Difference between revisions of "The Owasp Orizon Framework"

A lot of open source projects exist in the wild, performing static code review analysis. This is good, it means that source code testing for security issues is becoming a constraint.

Such tools bring a lot of valuable points:

On the other side, these tools don't share the most valuable point among them: the security knowledge. All these tools have their own security library, containing a lot of checks, without sharing such knowledge.

In 2006, the Owasp Orizon project was born to provide a common underlying layer to all opensource projects concerning static analysis.

In the following picture, the Owasp Orizon version 1.0 architecture is shown. As you may see, the framework is organized in engines that perform tasks over the source code and a block of tools that are deployed out of the box in order to use the APIs in a real world static analysis. 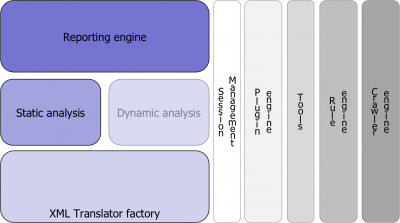 With all such elements, a developer can be scared to use the framework; that's why a special entity called SkyLine was created. Before going further into SkyLine analysis, it's very important to understand all the elements Orizon is made of.

Your personal butler: the SkyLine class

Named core in the architectural picture, the SkyLine object is one of the most valuable services in Orizon version 1.0.

The idea behind SkyLine is simple: as the Orizon architecture becomes wider, regular developers may be scared about understanding a lot of APIs in order to build their security tool, so we can help them providing "per service" support.

Using SkyLine object, developers can request services from the Orizon framework waiting for their accomplishment.

The main SkyLine input is:

Passing the requested service as string parameter, the calling program will receive a boolean true return value if the service can be accomplished or a false value otherwise.

The service name is compared to the ones understood by the framework:

The secondary feature introduced in this first major framework release is the support for command line option given to the user.

If the calling program passes command line option to Orizon framework using SkyLine, the framework will be tuned accordingly to the given values.

This example will explain better:

That's all folks! Internally, the SkyLine constructor, when it creates a code review session, uses the values it was able to understand from command line.

or the long format

And these are the keys that the framework cares about:

The org.owasp.orizon.Cons class contains a detailed section about these keys with some comments and with their default value.

The only side effect is that calling program can use -o flag for its purpose.

SkyLine is contained in the org.owasp.orizon package.

Give me something to remind: the Session class

Another big feature introduced in Owasp Orizon version 1.0 is the code review session concept. One of the missing features in earlier versions was the capability to track the state of the code review process.

A Session class instance contains all the properties specified using SkyLine and it is their owner giving access to properties upon request. It contains a SessionInfo array containing information about each file being reviewed.

Ideally, a user tool will never call Session directly, but it must use SkyLine as interface. Of course anyone is free to override this suggestion.

Looking at the launch() method code, inside the SkyLine class, you can look how session instance is prompted to execute services.

Internally, the Session instance will ask each SessionInfo object to execute services. Let us consider the Session class method that executes the static analysis service.

Where sessions variable is declared as:

As you may see, the Session object delegates service accomplishment to SessionInfo once collecting the final results.

In fact, SessionInfo objects are the ones talking with Orizon internals performing the real work.

The following method is stolen from org.owasp.orizon.SessionInfo class.

One of the Owasp Orizon goals is to be independent from the source language being analyzed. This means that Owasp Orizon will support:

Such support is granted using an intermediate file format to describe the source code and used to apply the security checks. Such format is XML language.

Translation phase is requested from org.owasp.orizon.SessionInfo.inspect() method. Depending on the source file language, the appropriate Translator is called and the scan() method is called.

Scan method is an abstract method defined in org.owasp.orizon.translator.DefaultTranslator class and declared as the following:

Every class implementing DefaultTranslator must implement how to scan the source file and build ASTs in this method.

Aside from scan() method, there are four abstract method needful to create XML input files.

All these methods are called in the translator() method, the one implemented directly from DefaultTranslator class.

Every translator contains as private field, a language specific scanner containing ASTs to be used in input file generation.

Consider org.owasp.orizon.translator.java.JavaTranslator class, it is declared as follows:

JavaScanner is a class from org.owasp.orizon.translator.java package and it uses Sun JDK 6 Compiler API to scan a Java file creating in memory ASTs. Trees are created in scan() method, implemented for Java source language as follow:

To implement statistic information gathering, DefaultTranslator abstract method statService() must be implemented. In the following example, the method is the JavaTranslator's. Statistics information is stored in the JavaScanner object itself and retrieved by getStats() method.

To anyone interested in Owasp Orizon framework, you can use the following links:

You can drop also a line to Orizon author: [email protected]