Command injection (or OS Command Injection) is a type of injection where the software, that constructs a system command using externally influenced input, does not correctly neutralizes the input from special elements that can modify the initially intended command.

For example, if the supplied value is:

when typed in a Windows command prompt, the application “Calculator” is displayed.

However, if the supplied value has been tempered with, and now it is:

when execute, it changes the meaning of the initial intended value. Now, both the “Calculator” application and the value “test” are displayed. 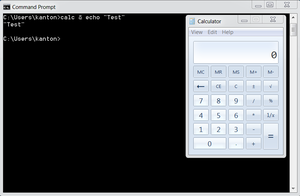 The problem is exacerbated if the compromised process does not follow the principle of least privilege principle and attacker-controlled commands end up running with special system privileges that increases the amount of damage.

The primary defense is to avoid calling OS commands directly. Built-in library functions are a very good alternative to OS Commands, and they cannot be manipulated to perform tasks other than those it is intended to do.

If there are available libraries or APIs for the language you used, this is the preferred method.

If it is considered unavoidable the call to a system command incorporated with user-supplied, the following two layers of defense should be used within software in order to prevent attacks

On top of primary defences, parameterizations and input validation, we also recommend adopting all of these additional defenses in order to provide defense in depth.

These additional defenses are:

The exec family of functions does not use a full shell interpreter, so it is not vulnerable to command-injection attacks.

In Java, use ProcessBuilder and the command must be separated from its arguments.

In this example, the command together with the arguments are passed as a one string, making easy to manipulate that expression and inject malicious strings.

Here is an example that starts a process with a modified working directory. The command and each of the arguments are passed separately. This make it easy to validated each term and reduces the risk to insert malicious strings.

In PHP use escapeshellarg() or escapeshellcmd() rather than exec(), system(), passthru().

How to Avoid Vulnerabilities

How to Review Code