Difference between revisions of "Bay Area" 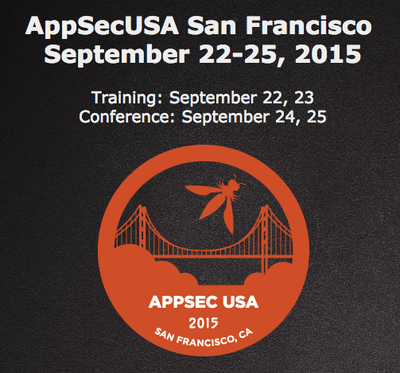 OWASP Foundation (Overview Slides) is a professional association of global members and is open to anyone interested in learning more about software security. Local chapters are run independently and guided by the Chapter_Leader_Handbook. As a 501(c)(3) non-profit professional association your support and sponsorship of any meeting venue and/or refreshments is tax-deductible. Financial contributions should only be made online using the authorized online chapter donation button. To be a SPEAKER at ANY OWASP Chapter in the world simply review the speaker agreement and then contact the local chapter leader with details of what OWASP PROJECT, independent research or related software security topic you would like to present on.

to this chapter or become a local chapter supporter. Or consider the value of Individual, Corporate, or Academic Supporter membership. Ready to become a member?

Picture is @BenHagen talking about cloud security and applications

The FIDO (Fast IDentity Online) Alliance is a 501(c)6 non-profit organization nominally formed in July 2012 to address the lack of interoperability among strong authentication devices as well as the problems users face with creating and remembering multiple usernames and passwords.

Michael Barrett is the CEO of an early stage startup in the enterprise security space. (“We’re in stealth mode - if I told you, I’d have to shoot you...”)

Previously, Barrett was President of the FIDO Alliance, an open standards consortium that is reimagining authentication on mobile devices and the Internet. He serves on the board of directors of StopBadWare, a 501(c)(3) Berkman Center spin out organization dedicated to mitigating the impact of malware on businesses and individuals.

From 2006 to 2013, Barrett was the Chief Information Security Officer for PayPal. In this role, he was responsible for ensuring the security of PayPal’s 130+ million accounts worldwide. He oversaw the information systems and services that protect the integrity and confidentiality of PayPal customer and employee information, and led a team of roughly 100 people.

The Joy Of Intelligent Proactive Security

Netflix is amongst the largest users of the public cloud, consuming roughly 30% of all the US's downstream bandwidth at peak. Multiple concurrent code bases, continuous deployments, regional content, and an ever-changing threat landscape make vulnerability and asset management difficult. In order to battle this dynamic environment, we have taken an approach of automating, simplifying, and collecting actionable data with proactive security.

This presentation will assert that the agility of modern infrastructure requires a different approach to security. We look at common areas of a mature security program: identifying and addressing potential issues, monitoring for attacks and anomalies, understanding your environment, collecting and sharing information, all while constantly reevaluating your approach. We will also walk through a few real world cases where intelligent proactive security has simplified Netflix's response time for identifying, responding to, and remediating security issues.

We will also provide demonstrations of a number of Netflix applications that are currently or soon-to-be open sourced that can help you simplify your security program regardless of whether you operate in the cloud or data center.

Attendees will leave this talk with real world strategies, techniques, and Netflix open source tools they can use in their own organizations.

Scott Behrens is a security evangelists at Netflix focusing on application security engineering as part of the Product and Application Security team. Scott loves security research and has previously spoken at DEF CON, Derbycon, Shakacon, Chicago B­sides, and a handful of other security conferences.

OWASP does not endorse or recommend commercial products or services, allowing our community to remain vendor neutral with the collective wisdom of the best minds in software security worldwide.

The 'Bay Area' is actually the San Francisco Bay Area in California, which is near other large towns that are across the bay from San Francisco such as Berkeley and Oakland, and south of San Francisco are San Mateo, Palo Alto, and the whole San Jose area. Currently, the Bay Area OWASP Chapter covers this whole geographic region.

OWASP chapter presentations must not be sales pitches and must adhere to a vendor neutral approach to the topic.

Presentation events will feature 1 or more speakers discussing application security. These events will include a networking session, with drinks and food, before and after the event.

The purpose of the OWASP social gathering is:

Note: These events won't have any formal presentations. They're meant to be social gatherings to meet others in the industry and chat about security. Check our quarterly OWASP Bay Area schedule for the security presentation events. https://www.owasp.org/index.php/Bay_Area

OWASP is hosting a special security boot camp for all RSA attendees and local developers. The training is recommended for developers who want to learn more about securing their code as well as security professionals who want to become acquainted with the latest web vulnerabilities.

Presented by Jim Manico and Eoin Keary, this intensive boot camp focuses on the most common web application security problems, including aspects of both the OWASP Top Ten and the MITRE Top 25. The course will introduce and demonstrate application assessment techniques, illustrating how application vulnerabilities can be exploited so students really understand how to avoid introducing such vulnerabilities in their code and understand fixes.